How the Heart Works? 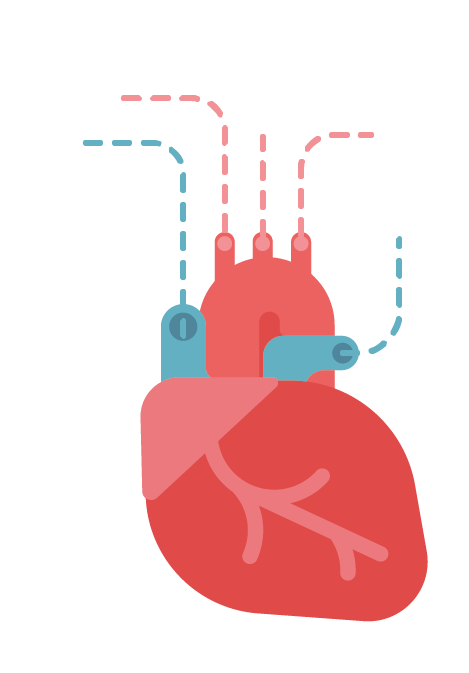 The heart is an incredible muscle that functions all day every day pumping blood around our body. It beats around 100,000 times per day, can pump over 2000 gallons of blood every day, and yet it is only the size of your fist. Despite all of this, most of us hardly notice it beating and its function can remain a mystery.

In an early embryo, the heart begins as a simple tube. Over the first weeks of development this tube twists, separates and forms walls and the heart structure. By 20 weeks old, the heart has nearly fully formed. After being born your heart hardly changes. The stability in the heart’s structure is part of the reason why cancer in the organ is so rare.

While the heart may seem like a single piece of muscle, it is actually divided into a left and right side. Each side is further divided into an atrium and a ventricle. The right side of the heart has an atrium that accepts used blood flowing from the veins in your body and feeds it through a valve called the tricuspid valve into the right ventricle. When the right ventricle is filled it squeezes, causing the tricuspid valve to shut and the blood to flow out into the lungs. After the right ventricle pumps this “deoxygenated” blood into your lungs your lungs saturate the blood with oxygen and it flows back to the heart’s left side. Fresh oxygenated blood flows from the lungs to fill up the left atrium. The left atrium feeds this fresh blood into the left ventricle through the mitral valve. The left ventricle is a tremendously muscular segment of the heart. When the left ventricle is full, it squeezes, causing the mitral valve to close and blood to rush up the main artery, called the aorta, to the rest of the body.

The actions of the heart are run by an electrical system that sends impulses across the atria and down the ventricles, activating muscle cells along the way. The electrical system in the heart is tightly regulated. The pacemaker in the right atrium, called the sinoatrial node, creates an electric pulse that quickly travels across both atria before converging at a small checkpoint just above the two ventricles. This point, called the atrioventricular node, slows down the pulse momentarily to allow a coordinated burst to enter the ventricles. After the pulse passes through this checkpoint it rushes down the wall between the ventricles and back up the sides in a cascade of peristaltic motion. Then the whole system recharges and fires again. This electrical pulse creates a coordinated wave of motion through the heart causing it to contract and create the pumping motion.

The entire heart is supplied by a network of arteries that begin just outside of the left ventricle in the aorta. They twist down and circle around the top of the heart to create coronary arteries. Vessels drop down and back to perfuse every chamber of the heart with a constant supply of fresh blood. In this way the sole supplier of blood to the heart is itself.